In setting about the cab design and manufacture we had to consider:-

LNWR cabs had a relatively easy curve to the main part of the roof, which became more pronounced as boilers became larger in the late 19th and early 20th centuries.  Reverse curvature on the outer part of the roof  enable the attachment to the cab side to utilise a standard angle section.  After the grouping, the LMS required wider route availability and rather crudely modified the outer part of the cab roof to a convex curve, bringing the cab roof/cab side  joint lower down.  This completely changed the appearance of the LNWR Cabs.  More recently the gauge has been further reduced, causing problems for many locomotives already licensed to run on Network Rail.  Our first attempt was to design the cab to fit within the Network Rail Locomotive gauge.  While we were satisfied with the aesthetic appearance, consideration of the complexity of the gauging process, particularly in an area little used by other vehicles, led to a rethink.  By demonstrating that our loco fits within the profile of a locomotive already cleared, the risks are greatly reduced.  Fortunately, thanks to the Bahamas Locomotive Society, we were able to design a new cab profile inside the measured profile of Jubilee 5596.  While of reduced corner height and width compared to the original, the general appearance of the LNWR cab is preserved.

Impact protection for traincrew  is very important for modern locomotive designers.  Although new builds have been allowed some derogation by alternative risk mitigation measures, the continued use of thin sheet cab structures is not always necessary.  Our front, side and roof sheets are 8mm as against 3.2mm of the LNWR.  While this doesn’t give the same degree of protection as a modern cab, it is a great deal less vulnerable than the original.  Of course it helps that we are happy with every little bit more axleload on the coupled wheels!

Under overhead wires it will be necessary to physically prevent crew (and their shovels or fire irons) from getting too close to live wires.  We haven’t got as far as designing anything specific, but we have made provision for attaching fittings to the rear cab roof stiffener.

One undesirable feature of the design is that the width of the footplating allowed for crew to pass outside the cab whilst cling on precariously to the rail on the lower cab side panel.  After a fireman suffered serious injury, the LNWR fitted a proper handrail on the upper cab side.  This would merely serve to encourage dangerous behaviour, which persisted to the end of steam.  One ex—fireman told me of an occasion when, after building up the fire of a Duchess for the southbound ascent of Shap, he turned round to find himself alone on the footplate.  His driver had taken it into his head to check the correct lamps were displayed, also perhaps thinking to wind up his fireman.  Eliminating this hazard would mean altering the locomotive and our only option is to forbid access outside the cab.  Perhaps we can employ spikes on the footplating  as well.

The original LNWR cab roof overhung the sides by 2½”, so rainwater was slightly away from the cab side.  The LMS modification eliminated the overhang, and although a rain strip was provided it was very shallow.  Drivers had to expect cold rainwater on their heads!  Roof overhang is limited by the gauge requirements, so we have fitted a rain strip to the edge of the cab roof and the rear handrail is a tube, serving as a drain.  We are under no illusions as to protection at speed or in windy weather, but it will help at low speeds and in light wind conditions.

Until relatively recently, workshop staff had to work out for themselves how to lift, store and transport components.  We have provided lifting points and designed a simple handling frame so that the cab top mounted on a large pallet can be safely handled without risk of being unbalanced despite the limited length of cab side panels relative to the roof.

The LNWR cab was flush rivetted, with angled joint pieces.  The number of parts required, holes to be drilled through and countersunk, and the actual riveting would have made for an expensive assembly.  Welding, using tab and slot assembly like a child’s toy, is both stronger (and safer) and more economical with the same smooth external faces as the original. Views on methods of construction vary, quite legitimately; our view is we want to replicate the essentials of a George, but with modern techniques where appropriate.  As already mentioned, the weight of the cab (just under 500kg or half a ton) is a small but useful addition to the adhesive weight.

Sometime this year we  hope to be able to show the completed cab mounted on the existing fully painted lower cab and splasher assembly.  Visitors can then judge for themselves whether we have successfully preserved the essence of the LNWR design. 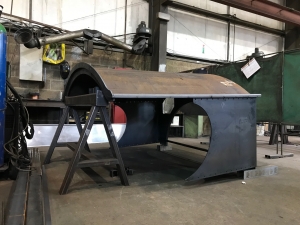 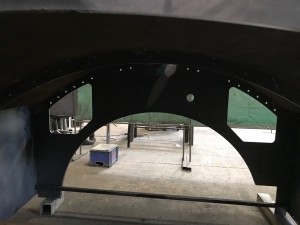