We’re delighted to share that Prince George has been featured by TimeOut! You can read the full article at the link below:

TimeOut: A steam engine named after Prince George is fundraising for its completion

http://newprincegeorgesteam.org.uk/wp-content/uploads/2016/05/PrinceGeorgeNameplate-2.png 0 0 Paul Hibberd http://newprincegeorgesteam.org.uk/wp-content/uploads/2016/05/PrinceGeorgeNameplate-2.png Paul Hibberd2021-09-28 18:17:362021-10-06 20:32:15Prince George Featured by TimeOut
Despite the pandemic 2021 has been a year of very constructive changes within the Trust.
In March Terry McMenamin and Tom Mainprize resigned and the Trust thanks them for their past services, which were much appreciated. It has however cleared the decks for a major reorganization as follows:
David Costello, Graham Connelan and Alasdair Hibberd have been appointed as trustees, bringing the total to five, a common figure with newbuilds. This has greatly increased our expertise in marketing, project management and digital skills. We have also benefited from guidance on fundraising from Oliver Edwards who runs his own consultancy, his fee ultimately being paid by the National Lottery. We have also appointed Jack Eagles from Keele University to a Summer Student Internship financed by the University. He has a background in Customer Relations and communications and is around five years older than most students. He also has the advantage of living in ‘George country’ (within the Stoke-on-Trent conurbation). He starts on 1 June.
In respect of engineering it was decided to put engineering services onto a contractual basis. We have therefore engaged Martin Shepherd who has long been associated with the A1 and P2 projects (besides us he is also working on the cylinder design for the P2). We have also separated out the engineering from a responsibility for engineering compliance. We also think it very relevant to point out that it is written into our contract with Keyte Smith Ltd our principal contractors and recognised suppliers to the modern rail industry that they carry the responsibility for the locomotive meeting the required vehicle acceptance body standards.
We have also started conversations with Technical Connection, a rail consultancy based in Eastleigh. These make clear that obtaining clearance is a multistage process. There has been clarity on rules for steam since 2017 even though a careful study of the small print is crucial. Our first step will therefore be a meeting between us and Technical Connection and the Office of Road and Rail in London. A by product of this is expected to be acceptance by a leading train operating company. We will also work on approval for the boiler from British Engineering Services and finding an insurer for the locomotive as a whole.
This obviously represents an immense amount of invisible work but we felt we should spell this out to avoid any apprehension that nothing was happening.
In fact my chairmanship has largely coincided with the period of pandemic and followed the retirement of Bruce Nixon on health grounds. Despite this the Trust has been notably active producing both the upper parts of the cab and the cab roof and the rear main frames.
Paul Hibberd, Chairman, LNWR George the Fifth, Locomotive Trust

Today is Women In Science Day.

February 11 is  the ‘International Day of Women and Girls in Science’.

We could say STEAM to us means STEM plus.

T   Technology (including IT)

M Mathematics (and maybe marketing as well if that is a science).

We  can say that as a charity we believe in diversity, that we think we have done quite well on BAME, providing work experience to somebody of Asian ethnicity and having somebody with us of African ethnicity for the sandwich year of his mechanical engineering degree.
Our project has also been used in the school context for learning how to produce CAD drawings and a model of the valve gear has been used to teach simulation. We have also done quite well in terms of age, giving a sixteen year old real responsibility.

Our weak area is involving the fifty percent of the population that is female. We have a great range of opportunities that could lead into careers in engineering or elsewhere in science and would  be delighted to help….we would be delighted to help. Please contact Paul in the first instance at: paulhibberd@gmail.com

Fed up with covid lockdown and the cold -try a little escapism, support the George!.

First site of our new cab and upper cabsides at our private North Nottinghamshire base in afternoon daylight last Thursday.

Frames arriving at our private North Nottinghamshire site this morning. 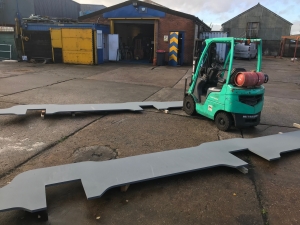 Please refer to the image  below as it provides context  of the manufacturing process  including a human working at his desk screen immediately behind the frames which is how things are done these days. Tata will be profiling and painting these frames before they are delivered to our private CCTV protected North Nottinghamshire base where a site is being prepared for them. 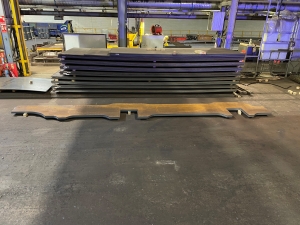 We have just heard from Tata Steel Profiles that our main frames (each over 23 foot long) have been cut and have passed their ultrasound test. They now await profiling and painting before we take delivery which will probably be in about a fortnight’s time.

We are delighted to bring our supporters the news that the main frame plates for ‘Prince George’ have been ordered from Tata Steel Profiles.  As soon as this week material will be at the Wednesbury plant to await its slot in the production schedule. This marks the start of a programme of work on the foundation of the locomotive, manufacturing the major components  such as hornblocks, stretchers etc as shown in the CAD image.  Note that the colours are purely to highlight the different major components. 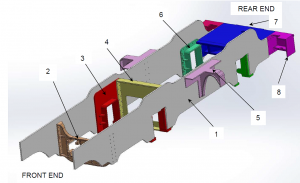 The front and rear frame plates of the George were overlapped between the cylinders and the motion plate. This was because of the limited size of machine tools available at Crewe .  We already have the front frame plates; however we will be concentrating on the main frames as the main structure of the locomotive.

LNWR express locomotives gained a reputation for cracked frames during the LMS era.  Possible causes include removal of the centre frame supporting the crank axle centre bearing, as ordered by Hughes, but very likely they were simply too lightly built.  Our locomotive’s frame plates are 30mm thick as against the original 1” (25.4mm) and they are deeper between the driving axles.

Hornblocks will be designed around roller bearing axleboxes and manganese liners to improve reliability and reduce overhaul costs.  In order to be confident in our frame plate dimensions, it was necessary to select the bearings and model the axleboxes in some detail, which will pay dividends when we move on to them.  Before committing to machining the frame plates we need to ensure that we define all the holes required for mounting the multitude of smaller details, such as brake hanger brackets, valve motion, attachments for cylinder cock and damper operating links, sand boxes and pipes.

We are now setting about detail design of the major components shown and getting costs for them, and their assembly into the locomotive frame.  After that we will work up a fund-raising appeal so we can assemble the frames.

I am really excited about the prospect of getting the main frames assembled thereafter assembling our existing parts on the frames and giving shape to number 2013 ‘Prince George’, and I hope our supporters will be equally enthused.

There will be further news on the locomotive shortly but a great deal is going on now behind the scenes so that progress to be made.

One area everybody is very conscious of is how rapidly the world is ‘going digital’. This includes communicating our message and fundraising and this is especially so at a time when Covid19 constraints severely impair opportunities for face to face events.

We are therefore delighted to report that via the Digital Lab scheme of the Arts Marketing Association (ultimately funded by Heritage Lottery) we have secured the services of Oliver Edwards for the next year to improve our digital presence. Ollie runs his own digital marketing company (Oliver Edwards Marketing) and combines being a genuine railway enthusiast with a client list in the ‘railway preservation industry’ and a relevant and credible academic background.

Our first virtual meeting took place last Friday (October 9) and highlights our need for two specific volunteers – firstly somebody who would like to produce short (200 word) items with an archive photo related not just to the locos but to the world of the London & North Western Railway and the early LMS more generally and secondly somebody who would like to take responsibility for posting these items on our facebook page. The first role is armchair based and the second requires a few moments of regular time for somebody who is digitally comfortable. If you are either of these people or someone in your family or an acquaintance is please let us know.

We have also formed a link with the digital department of University of Derby which is close to our manufacturing base and are taking part in a project for their students this term.

On the personnel front we are losing for the time being  Chali Chaligha of Leicester de Montford University who has spent the gap year of his mechanical engineering degree with us learning about computers, the characteristics of railway wheels and the paperwork engineers have to produce ‘in the real world’ to seek regulatory approvals for operation on ‘the big railway’.

JWe are also delighted to announce that Bruce Nixon, for many years a lone advocate of the need to recreate LNWR steam and a Trustee of our Trust ab initio until earlier this year has been made President, undoubtedly a well-deserved honour.

Lastly we would like to mention ‘anonymus; who has given us a lump sum donation of £5000 plus gift aid, undoubtedly a firm vote of confidence in us. We do believe that depth of understanding generates depth of feeling for our project and aspire that similar depth of feeling will inspire others to feel the emotion, follow this example and bring the future closer!

“Railway Magazine August issue includes a 6-page article in Practice and Performance covering the exploits of the George the Fifth class, mostly from their early days.  It is well recommended reading for our supporters

“The Trust gets only a passing mention, so we have submitted a letter giving more details of our achievements to date and our immediate plans, together with a picture of our front end.  Hopefully this will be published in the next issue.”