Given that it has been over a month since the last update this post will cover a number of recent developments and upcoming events in one go.

The auction at Crewe Heritage Centre
Founding member Bruce Nixon attended the auction held at Crewe Heritage Centre on Saturday 26th April where we successfully sold the whistle once belonging to the last operational Lancashire & Yorkshire Railway class 4-6-0; a historically significant item that was generously donated to the Trust to be auctioned. We are of course grateful to the donor and to the buyer who paid £760.00. This provides a real fillip to our funds and greatly assist us in moving forward with the build.

During his visit, Bruce also had the opportunity to meet with a number of people from the South Cheshire Model Engineering Society and the LNWR Heritage Co Ltd. where he also was given a tour of the works. Bruce managed to spread the word about our build a little wider and received many expressions of support.

Matched funding and a Legacies
Donations such as the whistle and the invaluable financial contributions from our growing band of supporters has led us secure our next tranche of matched funding from our kind benefactor. I should also note that we have received our first Legacy. On behalf of the trust I would like to express our sincere and profound gratitude to the donor for this considerable and generous gift.

If you would like to make a one-off donation, a Standing Order, or provide a Legacy you will find links to the relevant forms at the top of this page and remember, it you’re a UK taxpayer, your contribution receives matched funding through Gift-Aid and additional funds from our good friends, the tax-people (HMRC). For example, a donation of £40 secures £10 from the HMRC, which when matched with Gift-Aid, results in a £100 donation to the trust!

Your contribution matters and it is through your generosity that together we can complete this build sooner rather than later. Month-by-month the momentum is building and together we will recreate one of these beautiful and powerful machines, filling a hole in the preservation ledger (an operational early 20th century express type and an LNWR engine at that), to be enjoyed by present and future generations on heritage rail and certified for mainline running. Fabrication has commenced, parts have been donated and I’m pleased to say that we now have a place to call home so why not be a part of (re)creating history?

A home-base
We’ve held back from committing ourselves to fabricating anything substantial until we could secure a home for the parts, however temporary. While we’ve had the funds to commit to works that are far more substantial than the smokebox door, there has been the matter of storage.

We are therefore pleased to announce that the completed parts will be held in secured storage at a work in Heckmondwike in Yorkshire (next to a former LNWR trackbed where some new build LNWR fish vans are being constructed). Erection will occur elsewhere at a site that’s yet-to-be-determined but having secure storage within the works of like-minded friends provides us with the opportunity to commit to the next significant stage of fabrication.

Regarding this, while I would love to share the details, contractual agreements and pending discussions over the final details prevents me of sharing it just yet. Very soon. Suffice it to say, the next stage will be substantial and during the course of June and July, all will be revealed so stay tuned!

Upcoming events
The Trust will be at Kidderminster on the Severn Valley Railway this year for the annual LNWR Society event. All are invited and welcome to attend and more details with be forthcoming.

Easter weekend at Quorn
To conclude, the newly fabricated smokebox door was on display at the Great Central Railway’s ‘Easter Vintage Festival’ at Quorn station over the Easter long weekend from the 18th to 21st April. As you can see, the door made for quite a sight as it traversed the East Midlands from Bingham to Quorn! The tractor (in keeping with the vintage theme) is a 1953 Turner with V4 diesel and the LMS dray has been painstakingly restored by the talented chaps at Keyte Smith Ltd. We thank Jamie and his crew for their sterling work on the door and for transporting in such style to and from the event. 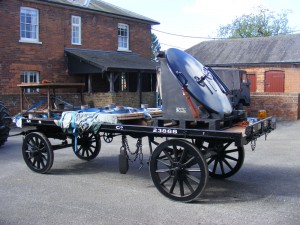 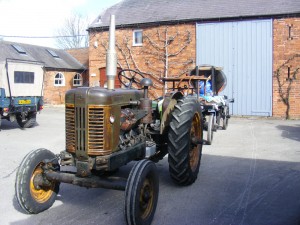 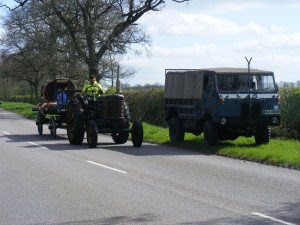 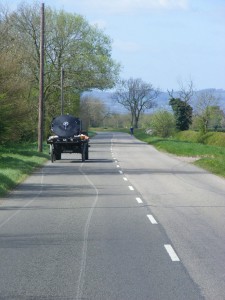 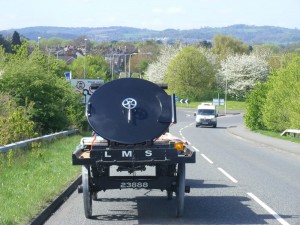 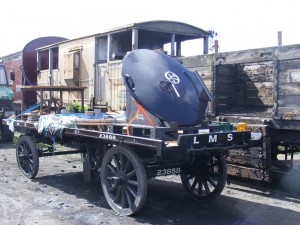 The London & North Western Steam Locomotive Trust was recently the recipient of a historically significant piece of railway memorabilia.

A supporter of the Trust, who at the time of receipt was a young 16 year old lad living near Blackpool and who now resides in Australia has most generously donated the whistle once belonging to the last operational Lancashire & Yorkshire Railway class 4-6-0 in service. The engine in question was a Hughes design (one of the rebuild ‘Dreadnoughts’), BR no. 50455 of the class pictured below, and was withdrawn from Blackpool shed in 1951. 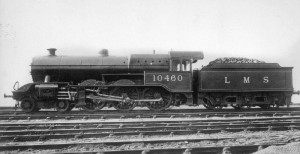 A Hughes Dreadnought in LMS livery.

The donor was verified the providence of the item, also pictured below with an accompanying letter, a handbill for the last passenger train hauled by the loco (a Blackpool to York excursion) and even a piece of coal from the day! A photo of the engine on the day can be found in Barry Lane’s book ‘Lancashire & Yorkshire Railway Locomotives’ published by Pendragon Press. This special excursion took place on sunny Sunday, 1st July 1951 in conjunction with the Stephenson and Manchester Locomotive Societies.

The L&Y whistle donated to the trust is to be auctioned at the Crewe Railwayana Auction at Crewe Heritage Centre on Saturday 26 April. It is expected that a free vintage bus service will be available from Crewe Railway Station on the day. We invite all our readers and supporters to attend and to spread the word.

We hope that the sale of this most important historic relic of a handsome and sadly long lost class will  raise a good sum that will go towards the building of our LNWR George the Fifth! 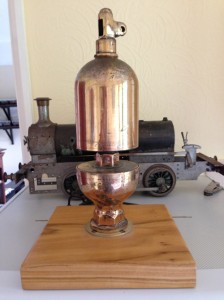 The heart of the London & North Western Railway will forever be Crewe and in turn Crewe substantially owes its rapid transformation from a tiny village in the early 19th century to a significant regional centre of over 70,000 inhabitants today to the London & North Western Railway; its antecedents and descendants. The existence of the prestigous Rolls-Royce and Bentley in Crewe, both marques of engineering excellence that owe their existence to the long and rich engineering tradition of Crewe, first established down by the coming of the railways.

Crewe is richly steeped in railway history and the railways and Crewe are forever entwined. Crewe Station was completed in 1837 by the Grand Junction Railway and is one of the world’s most historic stations as well being one of the major junctions on the West Coast Main Line. Crewe Works was opened by the Grand Junction Railway in 1840. To support the new locomotive works, over 200 railway cottages were constructed for the workers and their families who settled there, dramatically enlarging the tiny hamlet’s population. By 1848, after the merger in 1846 of the Grand Junction Railway with the Liverpool & Manchester Railway and London & Birmingham Railway, the works employed over 1000 men and were already producing one locomotive per week.

Crewe Works witnessed a number of firsts and milestones. Locomotive Superintendent, John Ramsbottom developed the first reliable safety valve and water scoops for the collection of water by passing locomotives from troughs positioned between the rails. The works was also the site of the first open-hearth furnaces employed on an industrial scale anywhere in the world. And another milestone among many – Ramsbottom’s 0-6-0 ‘DX Goods’ class went on to become the largest single class of engines in Britain with 943 built at the works in Crewe! Ramsbottom and his successor Webb, revolutionised the standardisation and interchangeability of parts and tools in manufacturing.

With the formation of the London, Midland and Scottish Railway in 1923, Midland Railway locomotive and engineering practice was broadly adopted and the new company’s centre of engineering was located at the Midland’s former headquarters and works in Derby. However, with the appointment of William Stanier as Chief Mechanical Engineer in 1932, Crewe’s experience with heavier locomotives (Claughtons and various 8-coupled good classes for example) led Crewe to regaining pre-eminence. Crewe became the centre of construction for the LMS’s most distinguished passenger and mixed traffic classes; the Princess Royals, Coronations, Jubilees and the redoubtable Black Fives.

Following nationalisation in 1948, Crewe’s place as a centre of engineering continued and the works turned out various Standards including Riddles’ Britannias and Clans. By the end of steam, Crewe works had turned out over 7000 locomotives. It’s worth noting that the LNWR George the Fifth class ‘Coronation’ of 1912 (which can be seen in our photo-collection on the main-site) was in fact Crewe’s 5000th engine! The George the Fifth class was indubitably a product of Crewe and an exemplary class embodying Crewe’s and the the London & North Western Railways’ engineering excellence.

The 1955 Modernisation Plan saw the rapid transition from steam to diesel and from 1957 on, the works were turning out a succession of diesel types, including the famed Intercity 125’s, which remain in service today.

For over 150 years Crewe has been and remains a centre of railway engineering, and while today the works are a shadow of their former self, Crewe’s proud railway heritage isn’t forgotten thanks to the tireless efforts of the Crewe Heritage Centre. The Trust’s cause is aligned with that of CHC as our locomotive similarly represents a celebration of this heritage. Our locomotive will be a living and breathing testament to Crewe and to the London & North Western Railway’s position as the largest and arguably most prestigious of the pre-grouping rail companies, and at the time of grouping, Britain’s largest business!

As with the tremendous efforts of the Crewe Heritage Centre in preserving the rail history of Crewe and of Britain more broadly, we hope that our LNWR George the Fifth new-build will be an ambassador for Crewe to present and future generations and a living celebration of Crewe’s contribution to early 20th century engineering. Our locomotive will exemplify the sophistication of the twentieth century London & North Western Railway, bringing it to life for the enjoyment and education of all.

With a common cause in mind, we are very pleased to announce a partnership between the Trust and the CHC. We commend the Crewe Heritage Centre in their efforts and encourage to our readers and supporters to pay the CHC a visit with their families and friends to experience their many fascinating and unique attractions including the only surviving Intercity APT. The Crewe Heritage Centre reopens in March 2014.