5 members of our group attended the annual LNWR Society Luncheon (see below). This is a regular feature in our ‘meet supporters’ timetable, which we find very valuable. We have held other such events elsewhere in the Midlands, at Kidderminster, Stone, Derby and Quorn, and that we plan to hold such events for supporters both South and North of this middle England ‘belt’.

Derek Buckles gave a brief talk about his reasons for being a passionate supporter of the project and as you can see from the photograph a signed LNWR portrait was auctioned to increase our funds. 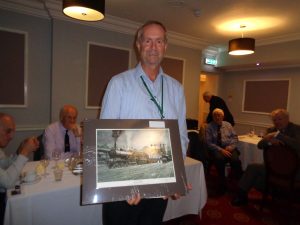 The talk: SETTING THE SCENE

Good afternoon ladies and gentlemen, thank you for allowing me to address you here today.

May I please have the lights down? Now I would ask you all to close your eyes for a few minutes.

Derek, a six year old, his mother, and his best friend Graham are walking to school one day in 1957.

Every weekday they walk the 2 miles through the estate, across the football pitches, and then finally through the station subway to arrive at the Infants at 9am prompt.

As they reach the subway under the four tracks Derek’s Mother says – hurry along boys or you’ll be late for assembly!

Derek replies – but Mum I want to see the trains – please

Graham adds – please please Mrs Buckles then we will RUN all the way!!!

Mother replies in resignation – just for a minute then BUT we must not be late for assembly (again).

Derek says to Graham in triumph – great! – Come on Graham, I know just where to stand so we can see the wheels go over us!

Thank you – I hope you enjoyed journeying back with me 61 years to one of my sharpest memories of life at Roby. We lived just 6 houses from the railway and I could trainspot from our back garden and from the school playground. Many of you will know that the village of Roby is on the Liverpool – Manchester main line – a line with an ancient pedigree going back to 1829.

The locomotive in question could have been an LMS black five or a Stanier tank, possibly even a Royal Scot – BUT – it was NOT an authentic LNWR locomotive as I was born too late! I feel somewhat cheated.

In fact the only LNWR locomotive I can recall seeing in my trainspotting days was G2A 49375 languishing at the back of Edge Hill shed in January 1965 it having been withdrawn back in December 1962. I wonder why it lingered there for so long – any ideas please see me later.

Had I been born 25 years earlier the locomotive hauling that train might well have been one of the Famous ‘George The Fifth’ locomotives built at Crewe between 1910 and 1915. With the last of the class being withdrawn in 1948 –BUT NONE WERE SAVED.

Now cast your mind FORWARD from 1957 to 2027 and picture a different scene:

A Saturday morning in Berkampstead – little Bruce is playing football with his brother, parents and great grandfather.

Not too far away is the London Crewe main line.

Suddenly a whistle is heard and they stop playing. The boys run to the fence as a gleaming PRINCE GEORGE swiftly passes – what a sight! Great grandfather has a tear in his eye as he explains the significance of the event.

Whilst there are a great many LNWR artefacts either still in use or preserved, no 20th century LNWR express passenger locomotive exists.

So this scene can NEVER OCCUR – UNLESS THIS SOCIETY HELPS TO MAKE IT HAPPEN!

We at the ‘LNWR George The Fifth Steam Locomotive Trust’ are working hard to build a fully working replica which we hope will be commissioned here in Crewe – just like its forbears over 100 years ago.

You have on your tables leaflets detailing our group and the extent of our progress made to date.

So I am asking for your personal help to make this happen, either by:

Thank you for your time; let’s give future generations the chance to witness at first hand the sight and sound of the Premier Line and in particular Prince George – over to you!