Having got the LNWR George drawings from the NRM, we can see that there is a slight difference in chimney design coming into use in the early 20th century.  Not much, but enough to get us into trouble with the authenticity police!  Attached an illustration of 3-D models of the chimney as built, and one of reduced height for NR running.  The latter uses the same cap and base, and is a Claughton chimney just made half an inch shorter.  To my mind this seems more satisfactory than faffing about trying to lose a bit of height on each individual component in a probably doomed attempt to disguise the reduced height.  At least we can claim some authenticity as a Claughton chimney, just don’t let anyone near with a tape measure!

Just for comparison I have included part of the profile we had early in the year, which seems to have been a Webb chimney.  Probably the pattern for the cap and the press tool for the base needed renewal?

We can soon price the cap, and Newtons are looking at the base for us. 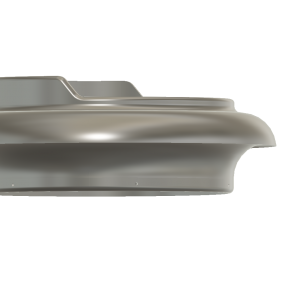