When did the project start and how?

2012. The charitable trust was set up that year and the project was launched at the NRM festival in the summer. The great age of twentieth century LNWR express travel was a huge gap in the preservation scene which we were anxious to fill. We were also keen to have the pre first world war 4-4-0 as part of the regular main line scene. Paul Hibberd had been trying to promote interest in such a project and by pure chance stumbled across an old railway magazine which asked anybody interested to make contact with Bruce Nixon. We each brought our own range of contacts to the party and the project was born.

What’s the total cost likely to be?

We estimate the cost of construction to be around £1.5 million. Though this only an informed estimate this has been corroborated by others in the new build steam community.

What still needs doing, and what are the current/short-term priorities?

Completion and commissioning of the locomotive!   Our belief is that creating the maximum visual impact as soon as possible is the key to maximising credibility and therefore success. Things are progressing fast so for an update on progress please refer to our ‘PROGRESS/BLOG’ page!

How much engagement do you have with the household of the Duke and Duchess of Cambridge? How much of a difference has the link made in terms of fundraising and publicity?

We feel very honoured that the Duke and Duchess have granted permission for us to name the locomotive after their son. Indeed it was stipulated that the name should be announced on his first birthday, which we were delighted to do by unveiling the name on its splasher with the LNWR crest at GCR Quorn on the day. Subsequently we have supplied regular reports on progress, for example photos of the cutting of the front frames etc. This endorsement does not fund the project overnight but it has got us some ‘main line’ publicity, for example a spot on BBC TV ‘The One Show’. We believe this link will be of ever increasing importance as physical progress becomes more evident and the project impinges on national consciousness.-

Supply chain issues seem to cause problems for lots of new builds – have you had any experience of this so far?

Not really. We are fortunate that Jamie Keyte, who is ex Bombardier and now runs his own engineering company, Keyte Smith Limited which is a recognised supplier of components for the modern railway, had been a great friend of the project and has been able to introduce us to heavy metal spinners, with experience ranging from overhauling the motion of a Super D through to work on problems with APT bogies. More of an issue is the supply of sufficient people with relevant skills (for example FEA or CAD) and time available to keep the ball rolling as fast as we would like.

The project has also worked directly hand in hand with the Office of Road and Rail assisted by Technical Construction  (an Eastleigh based firm  of rail consultants) and has enjoyed the support of  the Heritage Lottery (recently extended for a further two years) and the European Union.

What’s your fundraising strategy – what kind of person is donating the money, how do you find them, what are the revenue streams?

To pursue regular contributions, single contributions and in particular contributions related to specific objectives (for example ‘the boiler barrel club’). To have all these gift aided where applicable. To show appreciation to our supporters. To inspire them and potential donors by turning into metal. Once a site is agreed  for the new build it is hoped that this will also generate a new base of support.

In addition we have promoted the idea of legacy giving (including coverage in ‘The Daily Telegraph’ ) and are approaching corporates.  The proposition on which  the new build is based  is not just that we are building a locomotive but that we are recreating a world which no longer exists for the benefit of current and future generations.

All kinds of people donate the money. Members of the LNWR Society are an obvious first step (their current Chairman, Brian Hayes, is one of our trustees), ‘Steam Railway’ readers and people met at preserved railway/open day events are also important. You never quite know who your friends are going to be and people good at talking to the public who would like to speak at roadshows/man stands  and those with website skills are especially welcome.

How big are the active members? Who does the work on the locomotive? Steam enthusiasts tend to be older –what’s the demographic of your group like?

It depends on how you define active. There are half a dozen people more or less ‘up to their necks’ in it, a much large number who have a degree of active involvement. The work on the locomotive is done by contractors, but we are looking at the practicality of finding some involvement for volunteers (particularly as an incentive for those of our supporters who so wish). In addition we would be delighted to hear from home engineers who may be able to help with small parts.

The demographic of the group is fairly evenly spread among age groups over fifty, but Jamie Keyte is in his forties and Jack Eagles who originally was an intern is in his mid twenties. One problem with younger supporters is that once they get past university age their lives tend to be incredibly busy as they make their way in the world so their ability to provide support becomes limited.

Unquestionably understanding the main line certification regime, helped by the issue by RSSB of three new standards for heritage vehicles. We have appointed Ricardo Rail as our Acceptance Body, our first submission being for the coupling rods. Now, having engaged Ricardo Rail, it seems the dust is clearing so we can proceed with manufacturing as finances permit!

Archives – where have you looked, what have you found?

The NRM fortunately has most of the original drawings and LNWRS has been very helpful in supplementing these  and in providing information on other literature relevant to the class.

What’s the likely working future for the engine? Do you intend it to go on the main line, and if so what sort of top speed would you expect it to have?

Heritage railways, the main line and appearances as a ‘star’ at special events.

The Georges were surprisingly powerful express locomotives and commonly ran at speeds into the eighties. So we initially aspired to get clearance for 75mph. Ricardo has advised that 90mph might be possible and we are looking in the minutiae of current railway rules to see whether that might be possible on occasion. Either way we think we are looking at an exciting new entrant to the main line scene.

Will there be a reduced height chimney for the main line?

Yes, in common with Kings and Royal Scots there will be a height reduction.  Unfortunately people have put up overhead live wires on most of the stamping grounds that the Georges used to enjoy.

Two of our younger members! 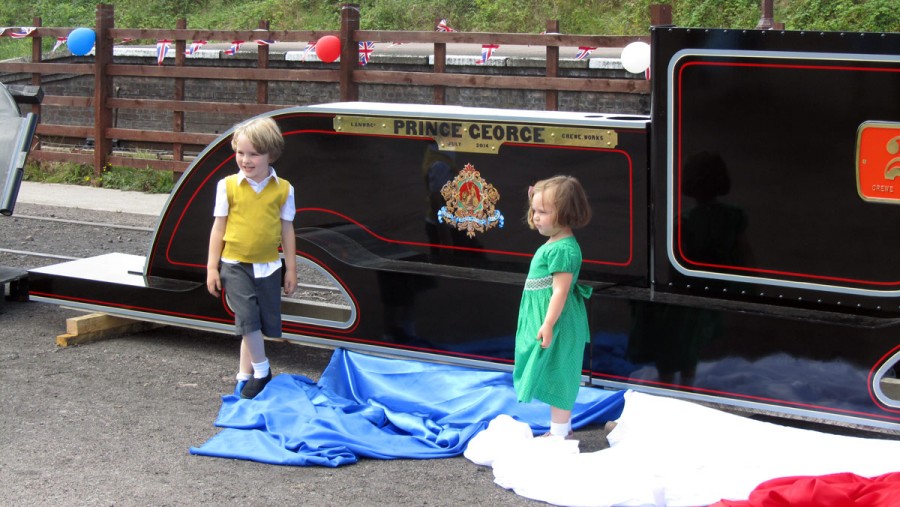 THE ARTICLE THAT STARTED IT ALL:

Bruce Nixon’s original article from 2000 which stirred up sufficient interest to launch our project – THANK YOU BRUCE!

Let’s build a Precursor from scratch

11th November 2018 – You will be aware that this date is the 100th anniversary of the cessation of action in the first World War.

May we explain that we are recreating a genuine WW1 locomotive, hence a genuine direct link with this part of our past.

Locomotive 2370 Dovedale, the last George to be built (before ours), appeared in 1916 and was finished in unlined wartime black. We acknowledge ‘Warwickshire Railways’ as the source of the photo in our Gallery.