The latest Steam Railway magazine (No.404 July-August) has details on the 2012 HRA Steam Railway Readers Award – part of the HRA annual award scheme for Heritage Railways.

We at the LNWR George the Fifth Steam Locomotive Trust believe that the The LNWR Webb Coal Tank Webb Coal Tank 1054 (BR 58926); the sole surviving member of a class of 300, which has recently undergone an extensive restoration to working order, thoroughly deserves nomination.

And George agrees!  He says, support one of his relations.

So why would anyone want to nominate the Coal Tank?

For more information on the Webb’s Coal Tanks, check out the Wikipedia page here. Further information on 1054 (BR 58926) and on the dedicated team behind her careful and considered restoration to working order can be found here.

The nomination form can be found on page 20 of the current issue of Steam Railway. (Well worth the subscription we might add).  The nomination form states: “I nominate… because…” We’ve outlined just a few of the reasons why the Coal Tank deserves the nomination here to help you out!

Completed forms should be sent to:

Name, address, home and mobile telephone and email must be supplied. Photocopied forms will not be accepted however you can email your nomination (i.e The Coal Tank of course!) to: steam.railway@bauermedia.co.uk

Let’s give the team behind the restoration of the Coal Tank and this marvellous little engine the credit they thoroughly deserve! 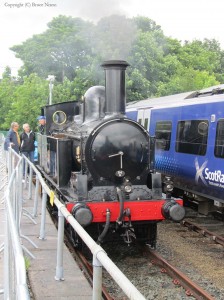