17 November – Tom Mainprize gave a talk to the 23rd Annual Crewe Luncheon of the L&NWRS.

8-10 June – RAILFEST. We attended the event and exhibited at stand 30. We had photos of George the Fifth at Camden, quarter scale live steam “Loyalty”, Wolfhound, “Coronation” ex-works at Crewe in 1911, “Malta” at Euston from Liverpool and “T J Hare”. The highlight of the event was the presentation by Robin Dean to the Group of an ORIGINAL WHISTLE which it is intended to renovate and use in due course. 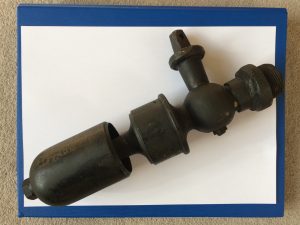 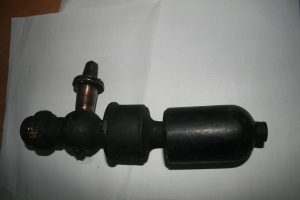 The LNWR whistle was originally fitted with an ‘acorn’ finial. A plain nut was substituted in round 1909.

You may well have wondered what has happened to the project to build a new George the Fifth. I have been silent for many months waiting until we had sufficient good news to report back to you. I am now delighted to tell you about the following exciting developments:

1 – FORMATION OF A STEERING GROUP. After the LNWR Society AGM last May we formed a steering group of four: Paul Hibberd, Derek Buckles, Ray Berry, Drawings Officer of the LNWR Society and me. Since then we have held two meetings and have made considerable progress, allocating roles and drawing up a strategy. However, sadly Ray Berry, a gifted engineer and scientist who was an enormous asset, died suddenly earlier this year. We organised a display for the LNWR annual dinner last year. We are most grateful to the LNWR Society, Chairman Peter Stanton and several pf their officers for the tremendous support they have given us.

2 – CHARITABLE TRUST. We have formed the LNWR GEORGE THE FIFTH STEAM LOCOMOTIVE TRUST. Paul Hibberd, Derek Buckles and I are directors and trustees. We are getting quotes for indemnity insurance; we have opened a bank account. We are preparing standing order forms at various levels along the lines of the B17 new build project. Once this and one or two other items are completed we will launch our campaign and invite you to subscribe and help us recruit subscribers.

3 – COVENANTERS (REGULAR SUBSCRIBERS). Crucially the project to build a new LNWR George the Fifth locomotive must put itself in front of the public and persuade people to become covenanters (regular subscribers). We’ll be sharing a stall with the B17 project – see next item. This is exactly the mechanism that was used to create Tornado (and other replicas that expect to succeed).

4 – NRM RAILFEST. An important opportunity to promote our project has come up in the form of the NRM Railfest. This is being held at NRM York in June. It has not happened for seven years or so. It is a high profile event. Hardwicke, G2 Super D Goods and the Coal Tank will be there. We shall have a presence there and the B17 project are generously sharing their stand with us. We’ll be manning the stand and telling the public about our project manning and recruiting covenanters (regular subscribers). Friday 8 June through to Sunday 10 June. We are in the process of creating an attractive display which will include a video showing the construction of “Coronation” and its emergence from Crewe Works in shiny black gloss. So do come, visit our stall and give your support. If you want to join us contact Derek Buckles.

5 – CHOICE OF GEORGE THE FIFTH CLASS. We have had discussions about which locomotive and what version to build with a number of people, like Ted Talbot and Roger Bell who bought and saved Princess Elizabeth for instance. These have led us to the conclusion that  the George the Fifth was an outstanding performer and would honour Charles Bowen Cook who was one of the most outstanding locomotive engineers of his time. With further improvements it will only offer the best performance for either mainline or heritage lines. Furthermore we aim to introduce technical improvements to overcome known deficiencies and take advantage of modern technical developments and building techniques to produce an even more distinguished locomotive. This will make it a project with appeal to engineers.

6 – DRAWINGS. Paul Hibberd and Ray Berry spent a day at NRM and established that there are sufficient drawings at NRM> Ray came back with copies. We are in discussions to find someone who may be able to fill Ray’s role.

7 – FINANCIAL BACKING. We have a donor who wishes to remain anonymous. He has offered £50k in five year tranches of £10k provided we match these sums. Currently we estimate a rough £1.5m for the construction. This is a relatively small sum compared with the cost of building much larger locomotives and certainly achievable if we are well organised and determined.

8 – WEBSITE. With the generous help of Grant Regan we are designing a website. He’s passionate about steam locomotives. He is an illustrator and designer by profession but with a calling to hand-build bicycles (bicycles and cycling being another passion). He’s an Australian currently living in Norway with his Norwegian partner. Grant first spotted us in the “New Build” website to which he has submitted information and pictures about our project. There is a picture of our fun day out at the steaming of the quarter scale George the Fifth named Loyalty at Audley End last summer. Grant is also a talented artist and has provided us with a beautiful painting of a George at speed in the night, far more evocative than any photograph could ever be.

9 – MUCH MORE TO DO. We shall be seeking other team members to fill the required roles and backers, a base for the project and construction of the locomotive and heritage lines that would be interested in using this superb locomotive.

10 – PUBLICITY. Crucially we shall be preparing a press release and writing new articles for Steam Rail, Heritage Rail and the Railway Magazine. A locomotive with a royal name, possibly named  Coronation should have considerable appeal and we hope to have a replica nameplate at Railfest.

We also discussed a suitable location for the project (Crewe?), adding more Trustees and deepening our link with the L&NWR Society.